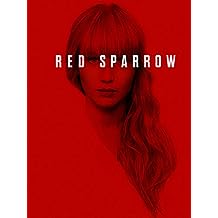 Having seen almost all of the films nominated for Oscars, we went looking for something else last weekend. As I read through the names of films, Terri responded to one of them with excitement - Red Sparrow.

Wow, what a surprise this movie was!

Great family that I have!

I had no idea what I was in store. I vaguely remembered watching the trailer, but I since I try not to pay attention to them, I didn’t remember anything. I didn’t even know this was a Jennifer Lawrence movie. I did have the impression it was an action movie with a female lead. When the film opens with a picture of a very attractive woman, I still don’t recognize her as one of my favorites.

She turns out to be one of only two good qualities in the film. The other is a satisfying twist that even I didn’t see coming. I saw some potential threads of it but didn’t put together how it would all fit together. Probably because I was reeling from the graphic violence and sex.

I don’t think I’d call it a bad movie, but it certainly wasn’t good.

As I often do when I see a movie I don’t love, I read some reviews after the fact. These two are spot on.

Lawrence looks like she’s having fun playing spy vs. spy, but she’s far too talented to waste her time on movies this mediocre. Michael Smith for Tulsa World

Red Sparrow is many things. Regrettably, a good movie isn’t one of them. Rick Kisonak for Seven Days