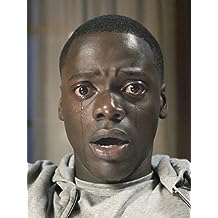 Sometimes a movie has one quote that wins best quote of the movie without any real competition. This is one of those movies.

I’ll share only part of it so we can share in the inside joke if you’ve seen it and yet I won’t spoil the incredible fun it is when you hear it for the first time.

We handle shit. That’s what we do.

It’s been a long time since I saw this one, but it still sticks with me. It’s a brilliantly directed, terrifying comedy featuring a fantastic performance by Kaluuya.

I came away from the film really thinking about my view of the world and how others must view it now or might have in the past - and how I might have in a different time.

I don’t want to give too much away, but I know there are issues with the end of the film. I think Tim Brayton deals with that best in his review for Alternate Ending.

Horror movies have bad third acts all the time; the hope is that they have two first acts that are this good, with such an excellent anchor as Daniel Kaluuya. Tim Brayton, Alternate Ending

Certainly worthy of the best picture nomination. I would be surprised if it wins, but mostly because of the genre. I wouldn’t be disappointed.